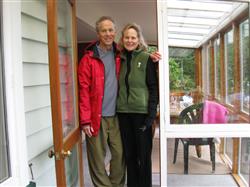 Tenant Searching for a Place in Oxford, England, United Kingdom

International garden tour company owner/former landscape designer/travel book author (Paul) and artist/photographer(Suzanne), Berkeley graduates, former London residents, anglophiles, active early 70's, seeking two-bedroom or larger house rental in or near Cambridge, August 1 till early September, 2021. Would also consider a home in or near Oxford for that same time period. Excellent references both sides of the Pond. Great Britain has played a major role in both our lives, starting in Berkeley in the '60's where we both studied English Lit, through our years living and working in London in the early '70's, writing/reading poetry and traveling the length and breadth of the country. In the early '80's I started Coopersmith's England, bringing small groups of horticulturally-inclined Americans to visit legendary British gardens and stately homes. (The company, now known as Coopersmith's One-of-a-Kind Tours, is in its 37th year.) Later this year we have an opportunity to return to London for four months, where Suzanne and I hope to spend many a happy hour at our favorite gardens, galleries and museums, while hanging out with old friends whom we've known since the '70's. As a sort of stepping stone to London, we'd love to spend a few weeks in either Cambridge or Oxford, neither of us ever having been to either fair city for more than a couple of days at a time. We've done numerous long-term holiday-home rentals, in the US, UK, and New Zealand. We are quiet, respectful people, who will look after your home as if it were our own (which is what we are doing as I write, in the hamlet of Gualala, along Northern California's spectacular. Mendocino County coast.)

1 Day | My dates are flexible

Comments: We are very flexible with the end date

I do not need to have utilities included

I prefer smoking not allowed in the home

I am willing to housesit

Yes, I can help with pets

Yes, I can help with mail and deliveries

Yes, I can help with plants or garden

Paul, born and raised in New Jersey, is the owner and founder of Coopersmith's One-of-a-Kind tours, North America's oldest international garden tour company. He has a BA from Berkeley (1968), and is the author of "Rule of Thumb: A Hitchhiker's Handbook to Europe & North Africa (Simon & Schuster, 1973). Suzanne, born and raised in Los Angeles, also graduated from UC Berkeley in 1968. Formerly a photo-journalistic-style wedding photographer, she made the transition to painting around 12 years ago. Making our home in Inverness, in rural West Marin Country, an hour north of San Francisco. we travel overseas nearly every year, usually to England/Italy/France or New Zealand.

You must have a two-way communication with the Listing owner before being able to post a review.

You need to have your own home rental listing in order to contact a member with a tenant listing. This listing has been added to your favorites for future reference.
Cancel Create Listing

Your review has been posted.

This action will post your review in your account and in public view. You will be able to delete it, but you will not be able to edit it. A notification will be sent to the person whom, or to the owner of the listing which you are reviewing. SabbaticalHomes reserves the right to withdraw your comments. Are you ready to post your review?